What Every Bankruptcy Lawyer Needs to Know About Divorce
Both bankruptcy and divorce are simultaneously a tragedy and a relief, and often go hand in hand.
Russell Knight 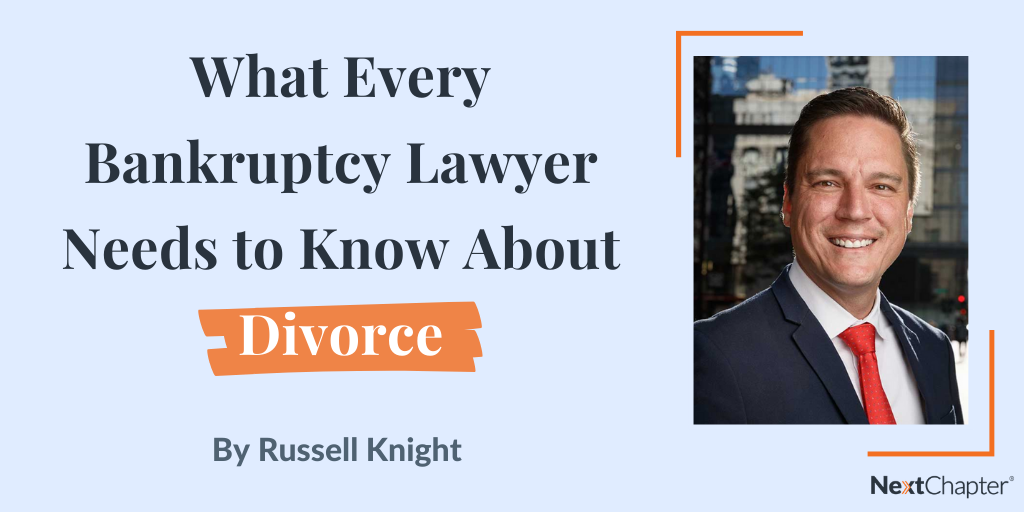 Bankruptcy is both a tragedy and a relief. Divorce is exactly the same.  Many bankruptcy attorneys will recognize that the two legal forms of relief, divorce and bankruptcy, often go hand in hand.  Because of this, attorneys who practice bankruptcy law need to have a solid knowledge of how a bankruptcy can affect a divorce and vice-versa.

When a bankruptcy is filed, an automatic stay is put on any pending litigation regarding the petitioners and/or their assets.

The bankruptcy automatic stay applies to divorce actions as well.

Essentially everything in a divorce case EXCEPT for the division of assets and debts is stayed by a bankruptcy.

Additionally, each local court is likely to have it’s own local rules as to how they handle a divorce during a bankruptcy.  Divorces subject to an automatic stay are usually put on a “bankruptcy calendar” where they sit in limbo until someone checks in on them.

If the bankruptcy is not a quick chapter 7, a bankruptcy lawyer is going to have to file a Petition for relief from the automatic stay with stipulations from the parties in order to resolve the division of the divorcing parties’ assets.

Bankruptcy Does Not Discharge Support Debts

If a bankruptcy client is already divorced or even separated, their support obligations (child support or alimony) will remain as debt which is non-dischargeable in a bankruptcy.

“A discharge under section 727, 1141, 1228(a), 1228(b), or 1328(b) does not discharge an individual debtor from any debt- to a spouse, former spouse, or child of the debtor and not of the kind described in paragraph (5) that is incurred by the debtor in the course of a divorce or separation or in connection with a separation agreement, divorce decree or other order of a court of record, or a determination made in accordance with State or territorial law by a governmental unit.” 11 U.S.C. 523(a)(15)

While not dischargeable, the payment of support obligations and debts can be included in a Chapter 13 plan and thereby reduced for the duration of the plan.

Marital debts are divided by divorce courts.  When one spouse files for bankruptcy they are not obligated to pay those debts…whether they are deemed marital or not.  The supremacy clause of the U.S. constitution lets federal bankruptcy law trump whatever is ordered by a state divorce court.

Because of this, divorces often end up being strategically written so that the bankrupt spouse is awarded the debt and no assets but some kind of ongoing support that creditors cannot touch.

The divorce can always be delayed until the chapter 7 bankruptcy is over.  In fact, the automatic stay requires that the divorce be delayed.  This will allow the couple to maintain their joint petition for bankruptcy.

The author, Russell Knight, is a divorce lawyer in Chicago, Illinois