Dealing with Student Loans in an Over the Median Chapter 7
Steven J. Richardson, a New Jersey attorney with almost 30 years of experience, covers what every lawyer needs to know about student loans in over the median chapter 7 bankruptcy cases in this guest blog post! Read to find out more about this special type of cases.
Steven J. Richardson 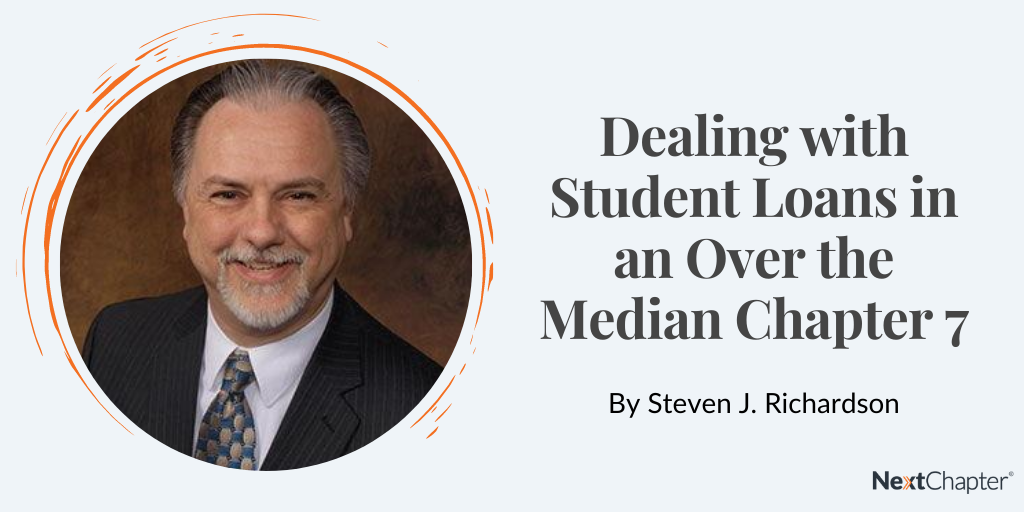 One of the problems that student loan holders have when they file a chapter 13 bankruptcy is the Catch 22 between the loans being, by default, non-dischargeable, while at the same time being general unsecured debt not entitled to interest over the life of the plan. The loans get lumped in with the credit card debt and medical bills and paid pro-rata.

At discharge, the debtor is then left with the unpaid principal balance (plans seldom pay 100%) and the interest that accrued over the life of the plan that then capitalizes into the remaining balance. Depending on the pre-petition balances and interest rates, they could come out of bankruptcy owing more than they did before.

For this reason, people look to file chapter 7 to shed other debt and make the student loan payments more affordable. This can be a problem, though, for over the median debtors who can afford the monthly payment on their student loans if they didn’t have to pay the credit card debt or the medical bills.

The means testing analysis does not allow for the deduction of payments for student loans, even though they are non-dischargeable, as they are of the same class of debt as credit cards and medical bills. This places over the median debtors into a situation where the DMI is large enough to create a presumption of abuse under 11 U.S.C. sec. 707(b)(2) that would stand in the way of a chapter 7 filing.

This can also be a barrier to filing for an under the median debtor who wishes to list their student loan payments in Schedule J, where the trustee claims the chapter 7 was filed in bad faith under 11 U.S.C. sec. 707(b)(3).

Rebutting the Presumption with “Special Circumstances”

Statutorily, there is a presumption of bad faith in these instances, but the question becomes whether the debtor can rebut the presumption under sec. 707(b)(2)(B) by showing “special circumstances.” This means proving that the expense in question is “necessary and reasonable,” “required,” has no reasonable alternative, and that if allowed would reduce the debtor’s DMI below the level of presumption of abuse.

Still, others focus on the future and assess the likely consequences for the debtor if the student loan payment is not treated as a special circumstance, as the court in the Eastern District of Pennsylvania did in In re: Harmon and the Middle District in In re: Womer. They look at the exceptional burdens placed on the debtor by reason of the obligation of the student loan that would survive the bankruptcy discharge.

Would the Debtor Be Worse Off Otherwise?

The District of New Jersey followed this reasoning in In re: Murphy in January of this year. In that case, the debtor established before the court student loan debt of $131,930.67 which necessitated monthly payments of $1,750. If that payment were taken into account, they would have negative disposable income.

The debtors opined that converting the case to a chapter 13 would leave them in a worse financial situation than they were in currently. They provided proof that, if they were forced into a chapter 13, their student loan balance would go up as much as $40,000 by time of discharge even if payments were made on the loans through the plan!

The court ruled in their favor finding special circumstances.

The key to getting clients like these through chapter 7 without making their student loan burden worse is to know how your courts define “special circumstances” when it comes to student loans. If they take a per se stance, great! But if not, you will need to gather the necessary evidence in advance of filing to be prepared for any challenge by the U.S. Trustee. This will give you the best chance of achieving a positive result for your clients.

This post was written by Steven J. Richardson, who is an attorney and the owner of Richardson Law Offices in Woodbury, New Jersey. His main areas of practice include bankruptcy, student loan defense, collection & credit, and many more. Steven has been practicing bankruptcy law since 1992 and it is a significant part of his practice.